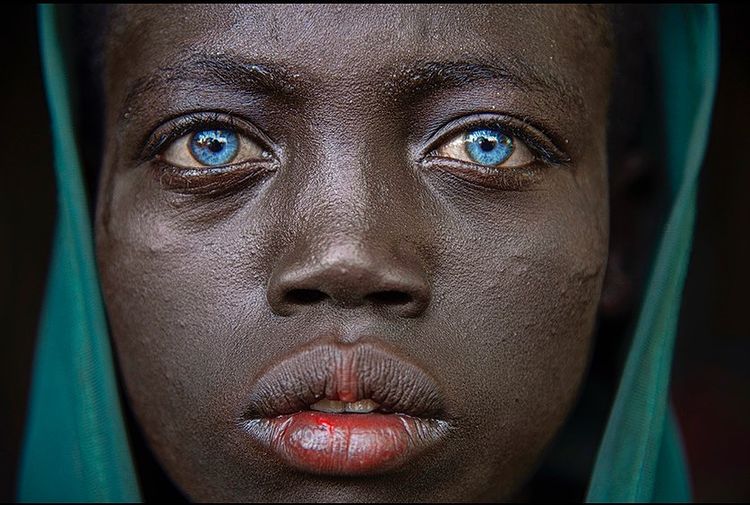 He has 20/20 vision, but he ‘suffers’ from a melanin gene mutation called Waardenberg Syndrome which affects the pigment in developing eye color, a condition that affects on average, 1 in 40,000 births, a condition that renders a stark cyan color. His name is Abushe, 12 years old and he lives in Jinka, Ethiopia. Over the past several years, he has been ‘discovered’ by many camera-toting tourists who find themselves in Jinka on their way to visit the Mursi Tribe, (the ‘lip plate’ women) as well as several noted professionals, including @ericlafforgue.
Abushe’s father is dead, and his mother works far from Jinka, so he is a ‘street kid’ sharing a room of an abandoned house with another street kid. Fortunately, on this day Abushe crossed paths with my students and myself. I found a storage shed under open shade and posed Abushe in the narrow doorway, (see attached video clip) knowing that the exposure for him was much brighter than the background interior of the shed, thus resulting in a black background. After all of us had enjoyed photographing him, we said goodbye, Abushe’s pockets filled with numerous 10 Birr notes, (totaling about $120) and the hearts of my students and myself were richer for the experience. Nikon D850, Nikkor 24-120mm, F/[email protected]/200 400 ISO Daylight/Sunny