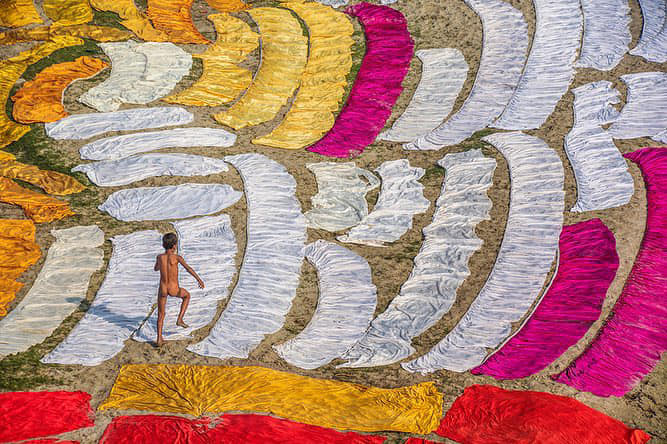 The Yamuna river runs right through the city of Agra, India, a city most notable for being the home of one of the Seven Wonders of the World, The Taj Mahal.
Unlike the famous Ganges River, which runs through the most holiest of India’s cities, Varanasi, the Yamuna, in the minds of most, is ‘just a river’ yet for me, the banks of the Yamuna river are the most colorful banks of any river I have ever seen world-wide!

Some days, more than others, the banks of the Yamuna River become carpets of color as the daily washing of large brightly colored curtains are laid out on the banks to dry, creating a patchwork quilt of color, large enough to cover as many as 300 king size beds! (See a small display from this mornings shoot in second image in comments section)

On this morning, from atop one of several bridges, and shooting down onto the colorful ‘blankets’, I caught several frames of a young boy, at play, adding not only a sense of scale, but his nude frame combined with the bright colors that surround him seem to infuse the overall composition with a sense of unbridled enthusiasm for the colorful life in which we live.