Home Blog The Letter “A” 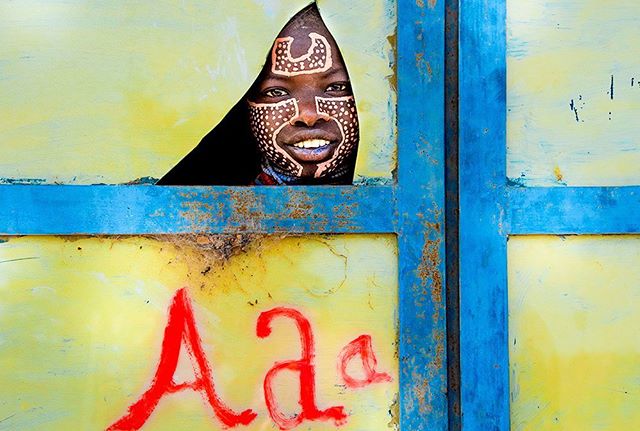 A million years ago, there was an explosion, actually an eruption, a volcanic eruption, spewing lava and rocks of all sizes onto the desolate valley floor. Then just two years ago, one of these rocks, a small rock, a hand throwing size rock, a little bigger than a mature radish, found its way into the hands of an 11-year old boy, a boy who belonged to the Karo Tribe of SE Ethiopia’s Omo Valley. It was on a Monday, when this boy threw the rock at a goat, to get it’s attention, a goat that had veered off course, but just like the goat, the rock he threw veered off course, smashing through the Karo Tribe’s schoolhouse window, a window that was a mere two feet above the goat, the goat who was below, eating the greens of a low hanging branch of an acacia tree. The young boy was frightened, expecting the teacher in the room next door to rush outside and see who was responsible, but no one came. I looked at him, he looked at me, I shrugged, he smiled, and then he continued on. One year later almost to the day, and a testament to the drought like weather in this part of Ethiopia’s Omo Valley, that broken window, and it’s shark fin shape, (and also the shape of the letter A too) had yet to be replaced. Hearing my approaching footsteps as my feet ‘crunched’ across the dry grassy ground, a young girl, inside the schoolhouse, peered out from behind the ‘letter A’, the shark fin, and smiled. I froze, motioning her to also freeze, then quickly raised my camera to my eye, a classic ‘who cares F11’ Aperture Priority, 400 ISO, and pressed the shutter, composing a portrait, framed easily by the ‘letter A’ and a window with its obvious suggestion of thirds, a single picture, worth a thousand words, and a million years in the making.