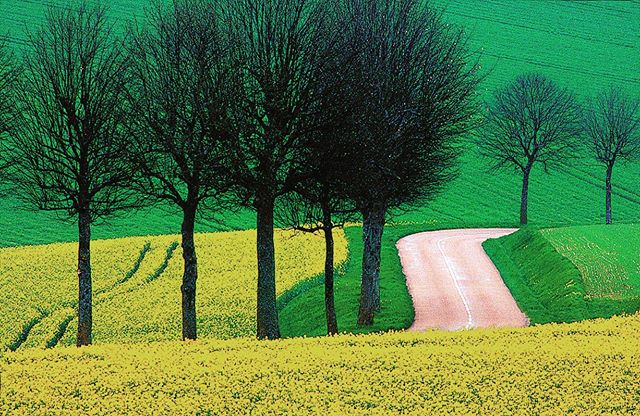 “Where’s the bicyclist? Where’s the jogger? Doesn’t ANYONE take morning walks around here? And where is the farmer normally seen behind the wheel of his 1960 CV Citroen?!?!?!???”
The frustration was real as were the questions I was asking myself after setting up this composition of fields of spring wheat, Yellow Rape, a stand trees and a narrow strip of roadway with my tripod mounted camera and Nikkor 200-500mm. Granted it was an early Sunday morning, here, ninety minutes south of Paris, France and the closest village was 8 km away, but still, you would think there would be much more activity over this past hour then just the appearance of two vehicles on that lone strip of road, modern day vehicles I might add, that would surely turn this scene into an amateurish looking car advertisement, something I wanted no part of, so I continued my wait until finally, I gave into acceptance, took a few more frames of the ‘empty’ scene, and moved on, concluding that ‘empty’ was still a subject, in fact ‘empty’ in this case might allow the viewer to ‘feel’ to ‘hear’ the stillness of this Sunday morning. Yeah, ‘empty’ is actually FULL of quiet..