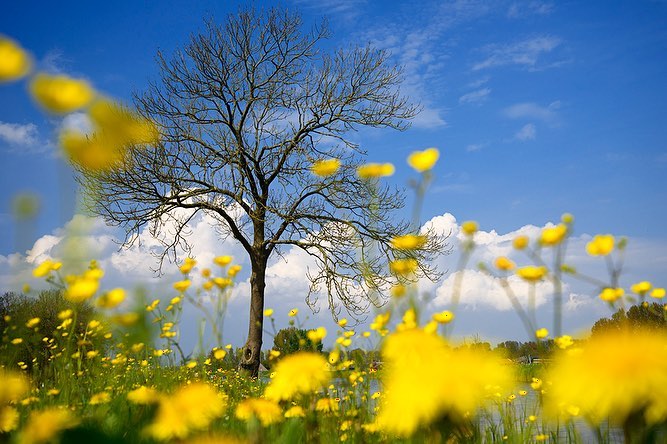 Selective focus is a technique and a photography term that gets thrown around a lot, but often times without mentioning the all important need to USE MANUAL FOCUS!
With each Spring, you will have numerous chances to practice the art of selective focus, but again, any attempt to do selective focus in Auto-focus will actually become more of a test in how long you can avoid using out the f-word in frustration since the ‘brains’ of Auto-focus rarely understands what it is you want to focus on when you are working in a ‘crowded field’.

In late April, along the many dikes of West Friesland Holland, (photo#2), buttercups abound, in contrast to the still naked trees whose leaves will not be forthcoming for another month.
From down low, lying amongst the bright yellow flowers, with my aperture at wide-open, (F/4 in this instance), and after focusing on the tree, I simply move about, left, right, up, down until I feel my frame is filled enough with a foreground of out of focus buttercups, in contrast to the in-focus tree, resulting in the image you see here. This idea is NOT limited to yellow flowers and ‘naked’ trees, nor is it limited to the season of spring. Think, think think, let your imagination run free!