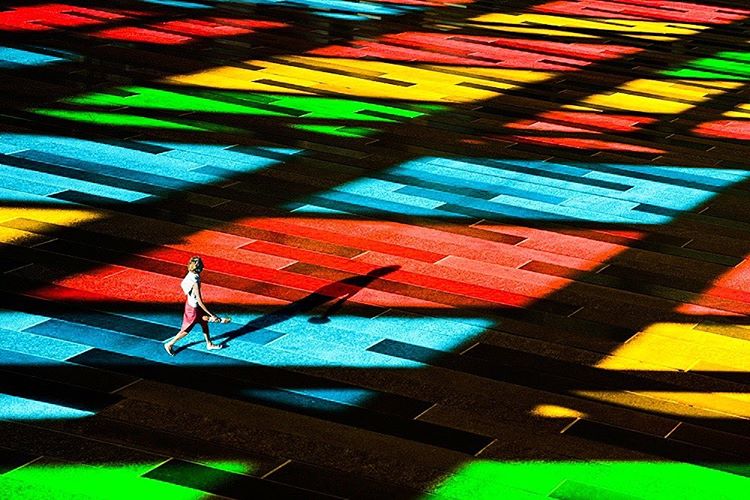 Regarding this image, it is an image that not only showcases the great color/light cascading across the floor of the building’s interior, but it appears I was lucky enough to capture a lone person walking through the center at the same time. I say appears, because during the two hours that I was there, this large section of the floor remained an empty, closed off area due to some kind of maintenance and although I had shot this image two years ago, it was only this weekend that I finally found the time to practice my attempt at being a ‘digital artist’. The lone woman seen walking in this photo, was in fact a lone woman on the streets of Paris, whom I photographed from above, from a third floor apartment terrace, and then blended her into the Montreal Convention Center, a simple copy and paste/layer mask.

Yes, normally people are seen walking in this area of the Convention Center but not on the day I was there, so yes it’s a ‘real’ scene but by no means a real in-camera single exposure capture.
I am obviously not opposed to sometimes re-creating scenes via Photoshop, not opposed to taking credit for being a ‘digital artist’ either, not opposed to telling you when I do, BUT my old school ways are such that I will always prefer to see, hear, touch, taste, and smell ‘the food’ that I’m about to ‘cook’ in real time, versus preparing and cooking my ‘food’ inside the sterile confines of a computer screen where the only sense that is activated is my sense of sight.