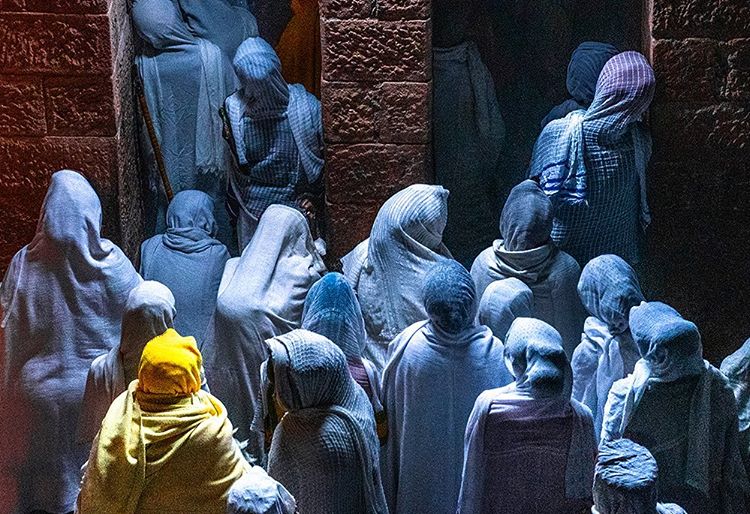 Sunday morning church services in Lalibellla, Ethiopia, a morning photo shoot starting with a 4am alarm. Arriving at one of the seven rock churches, literally carved out of the rocky terrain, the morning begins to unfold. It’s now 5:15am, too early for natural light, and with only a few exterior lights surrounding this particular rock church, it is no surprise that I am using an ISO of 6400. From the surrounding rock ledge, I am able to be above one side of the church and women, clad in white and light blue, begin to arrive, one by one then two by two and soon, the group begins to swell, in front of the ‘women’s’ entrance to the church, and then the unplanned, the unexpected, a lone woman, clad in yellow, a yellow that ‘breaks’ the calm of the white and light blue, much like the welcomed contrast of a lone yellow sunflower against a clear blue sky, yet I sense her impatience at finding the entrance to the interior of the church blocked and my thoughts are quickly confirmed, “she’s going to exit left, out of the frame-no!!!” Quickly I fire, and two seconds later, yep, she veered left and was gone, but the evidence is indisputable; she was there. Nikon D500, Nikkor 18-300mm F/[email protected]/100 6400 ISO