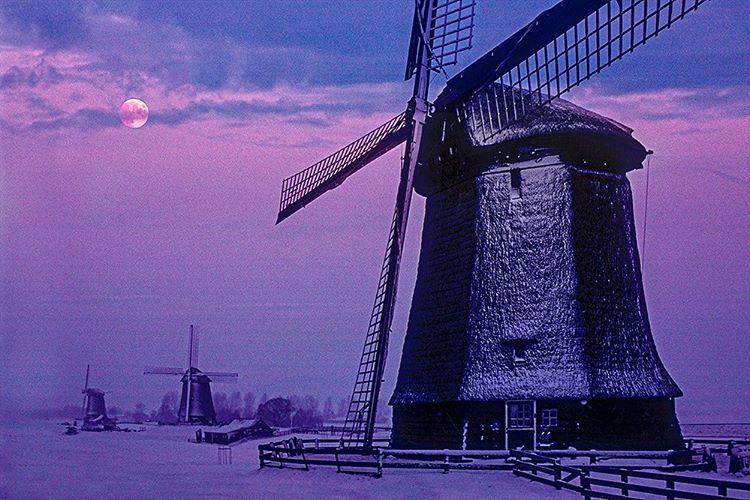 This is another recent scan of a 35mm slide, shot in the year 90 or 1991, in West Friesland, Holland. It was about 30 minutes before sunrise; the moon was on its way to setting in the west. I have shot these same three windmills over the course of many years, and this image was taken while shooting images for a coffee table book I did simply called HOLLAND, published back in 1992.
This image didn’t make the cut, but its always been a favorite of mine, an image that could be an album cover for done ‘cozy’ Electronic Chill or Ambient Chill music.
Taken with my Nikon F/3, Kodachrome 64 slide film and I don’t recall the lens I used, (no meta data when shooting film of course) so I could be wrong but I think I used my 35-70mm at 70mm. I do recall shooting this composition from a distance, across both a road and a dike, and with the camera and lens on a tripod at F16 if not F/22 for two to four seconds. I do know that when shooting a scene with the moon, you can’t go longer than 8 seconds otherwise the moon will ‘disc’ because of the earth’s rotation.
As far as the colors, this has more to do with a welcomed ‘flaw’ of Kodachrome that long exposures of 1 second or greater would result in Reciprocity Failure, which in laymen's terms meant the colors would not hold up, they would ‘bleed’ as well create colors unseen, but like I said, more often than not, the ‘unseen’ colors were welcomed by most of us as was the case here. To my eye, the scene was more grey/white snow, yet due to reciprocity failure a much more blue/magenta image was created, something of course that I could not see until I dropped off my film at the camera store and then waited impatiently for 24-28 hours to pick up the film and spread it out on the light table. Only then could I get 100% confirmation that I ‘failed’ or ‘succeeded’. You keep shooting!