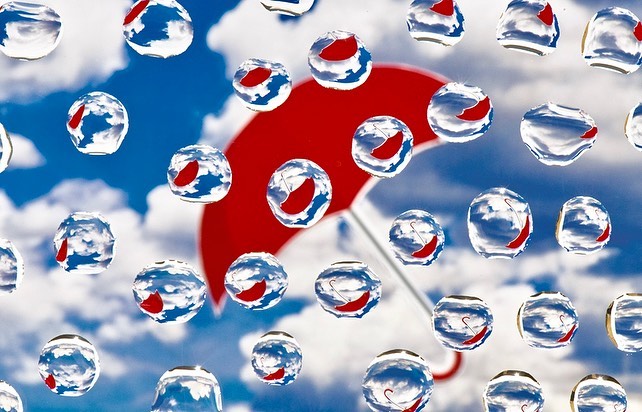 Years ago I discovered dew drops are like a fish-eye lens in that they record the scene BEHIND them. And it was a few years later that I hit upon the idea where I could use a glass top lamp table, that has not one but two glass shelves, where I am able to create countless ‘dew drop’ compositions, (2nd photo-and atop the first glass shelve, and with the aid of a large syringe I placed individual drops of a hair product called SMOOTH SHINE, in a somewhat random fashion on the glass. (Difficult to see, but inside the marked arrows are the ‘drops’.) Based on the principles of close-up photography, we can assume that IF we focus on these ‘dew drops’ (or ’rain-drops’ if you prefer) then whatever is placed on the second shelf, should in theory be recorded inside each of these ‘fish-eye lenses’.

The idea behind this image was of course to create an image of rain and so I went into my file of CLOUDS and SKIES and chose to make an 8X10 print of one such sky. I than came upon a simple yet stark red umbrella that was part of a department store advertisement in the local newspaper and I cut out the red umbrella and placed it on the 8X10 print of sky and clouds. Sure enough, I was soon immersed in creating an image befitting an advertisement for the Weather Channel! With this idea in mind, why don’t you consider doing the same thing with the theme, “It’s raining cats and dogs”? 🤔